Welcome to the Middle East Research Guide!  Here you can find a multitude of primary and secondary resources relating to the Middle East, ranging from manuscript collections to rug catalogs.  Listed resources have been categorized by field of study and medium, however a list of all resources also exists for those who simply wish to peruse what is available.  A description has been provided for most resources, however there are many which display no information due to a multitude of issues.  Additionally, various tags and extra information like language or ISSN have been provided when possible.

The "Field of Study" tab at the top of the page will allow you navigate through fifteen categories which constitute various academic disciplines.  Inside each of the fifteen sub-tabs are resources which have been deemed as relevant to that specific discipline.  As there are often similarities between disciplines, resources can and often will be listed in multiple categories.  Similarly, since the boundaries of disciplines aren't always well defined, there will be resources which don't perfectly fit into categorizations, or resources which should be included which aren't.  When using this guide and the included categorizations, it may also be useful to browse through tabs of similar genres or the "All Resources" tab.

The "Resource Medium" tab at the top of the page will allow you navigate through fifteen categories which constitute the style, medium, and method through which information and content have been stored.  Included are more traditional mediums such as newspapers or manuscripts, as well as more diverse forms like political posters or interviews.  Inside each of the fifteen sub-tabs are resources which have been published in that specific medium.

This tab houses all resources added to the Middle East Research Guide, including those which did not fall under the 30 categorizations house by the field of study and resource medium tabs.  While LibGuides lacks an in-site search function, your in-browser or computer search function might be helpful if you're looking for a specific piece or type of content.

If you have come across a link for a resource which is dead or leads to the wrong resource, please email the guide editor at LinkR@oxy.edu with a brief description of the issue.  If you need to access the resource in the meantime, here are some steps to find where the resource has gone:

If a resource's description does not match the resource or is partially incorrect, if the resource is now hosted elsewhere on the website, or if you believe the resource has been categorized incorrectly (either put in the wrong category or should be included somewhere it wasn't), please e-mail the guide editor at LinkR@oxy.edu with a brief description of the issue or change request. 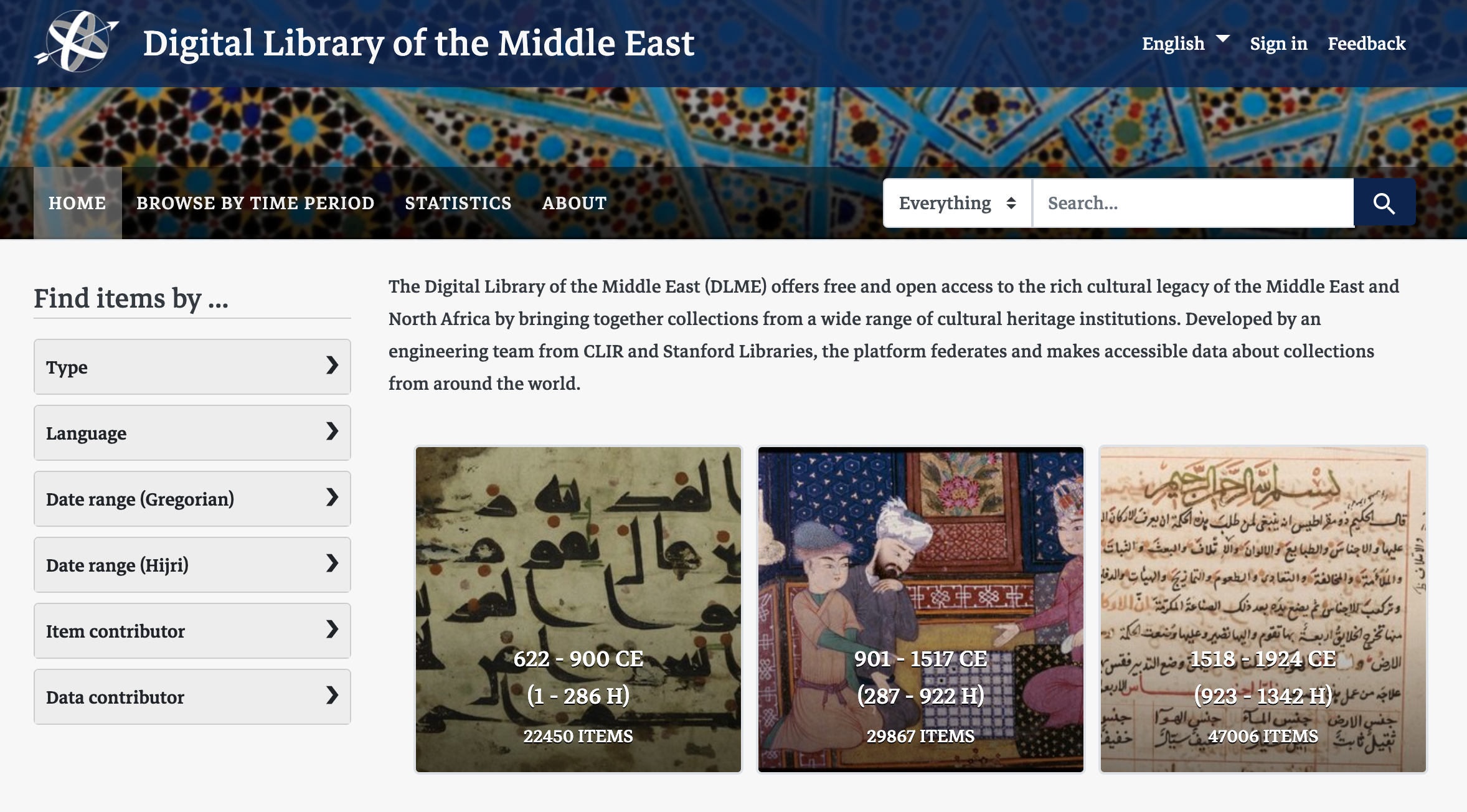 Digital Library of the Middle East

An international collaborative effort under development for four years, the DLME currently brings together 127,443 digital records of materials held in museums, libraries, and archives worldwide. It also provides an array of applications, tools, and descriptions that enrich the content and facilitate browsing, search, and interpretation. The DLME is intended to serve as a resource for teachers, students, and researchers, as well as for the general public. 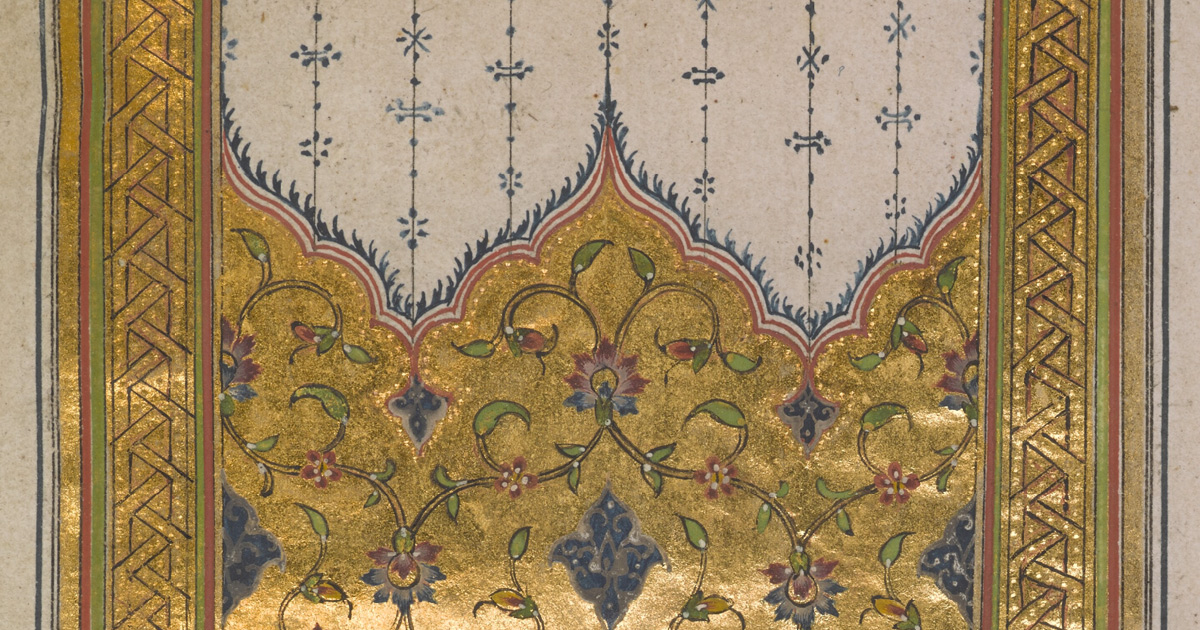 The Qatar Digital Library (QDL) is making a vast archive featuring the cultural and historical heritage of the Gulf and wider region freely available online for the first time. It includes archives, maps, manuscripts, sound recordings, photographs and much more, complete with contextualised explanatory notes and links, in both English and Arabic. Our catalog of 6,500 numismatic pieces – coins, glass weights, dies, medals, etc. - is the third major catalog of Islamic numismatic material held in the Egyptian National Library, formerly the Khedivial Library, Egypt’s most important library. Our catalog differs from its predecessors in a number of ways. First, it is a new catalog in that we had to read the inscriptions from the digital images which were taken under difficult and rushed conditions and not from the actual objects for reasons which are explained in the section entitled Introduction. Second, we included in this electronic catalog inscriptions in Arabic as Dr. Sherif Anwar read them, which was never possible in the previous studies because of costs. Inscriptions in European languages and references are the work of Dr. Norman D. Nicol from the 1982 catalog of the collection.

The Palestinian Oral History Archive is an archival collection that contains more than 1,000 hours of testimonies with first generation Palestinians and other Palestinian communities in Lebanon The project will digitize, index, catalog, preserve, and provide access to the material through the creation of a state-of the art digital platform. It aims to expand and include additional oral history collections documenting varied aspects of the Palestinian experience in Lebanon and the region. The project is being completed in partnership with the AUB Libraries, the Nakba Archive and the Arab Resource Center for Popular Arts (AL-JANA).

The Islamic State (ISIS) regularly puts out a glossy propaganda magazine aimed at recruiting jihadists from the West. It is sophisticated, slick, beautifully produced and printed in several languages including English...  'Dabiq' as it is called, bills itself as "a periodical magazine focusing on the issues of tawhid (unity), manhaj (truth-seeking), hijrah (migration), jihad (holy war) and jama'ah (community). It will also contain photo reports, current events, and informative articles on matters relating to the Islamic State."  It portrays the Islamic State as they see themselves: boasting of their victories and painting a romantic image of the restoration of an Islamic golden age and the heralding of a glorious new Caliphate based on holy war. The Golhā ('Flowers of Persian Song and Music') comprise 1400 radio programs consisting of approximately 886 hours of programs broadcast over a period of 23 years - from 1956 through 1979.1 These programs are made up of literary commentary with the declamation of poetry, which is sung with musical accompaniment, interspersed with solo musical pieces. For the 23 years that these programs were broadcast, all the most eminent literary critics, famous radio announcers, singers, composers and musicians in Iran were invited to participate in them. The programs were not only exemplars of excellence in the sphere of music but highly ornate and refined examples of literary expression, making use of a repertoire of over two hundred classical and modern Persian poets, thus setting literary and musical standards that are still looked up to with admiration in Iran today and referred to as an encyclopedia of Persian music and poetry.