A quick guide to install and start using LaTeX

This section of the guide is intended for people looking to get started creating documents with LaTeX.  If you still need to install LaTeX please see the Getting Started: Installation section of the guide.  The focus of this portion of the guide is to explain the structure of a LaTeX document, introduce various functions and symbols, and provide the reader with an understanding of how to write, edit, and produce their first document.  When you are done with this page take a look at the Sample Document tab below to help you create your first document.  Check the Exercise tab of this guide if you are looking for some practice exercises to help get you familiar with LaTeX.

Packages allow for additional features to be used within a LaTeX document.  Both MikTex and MacTex come pre-installed with a large number of standard packages, but instructions for installing new packages can be found here.  To use a package include the command \usepackage{} where the argument is the package name i.e. \usepackage{amsmath}.  Below is a brief list of some useful LaTeX packages:

This package allows for more complicated mathematical structures within a document such as matrices.

This package is for the more advanced user.  It allows the user to better control the formatting of the document.

This package allows graphics to be integrated into a document.

This package allows for hyperlinks inside a document.  Use the command \hypersetup{} to control different link colors.

A useful package if you are having trouble with spacing inside of tables.

The first command in any document.  Used to specify what type of document is being made.  Some common arguments are article (common for scientific journals), book, IEEEtran (for IEEE transaction format), slides, beamer (for presentations).

This command imports a package into the LaTeX document.  This is important for including any commands that are not standard in LaTeX.

The argument is the date associated with the document.  Note that leaving the argument empty will create a blank date in the title, and not including the command will default the title to the date compiled.

Creates a title based on the \title, \author, and \date provided.

Denotes a new section.  The title section should be used as the argument.  Sections will be automatically included in the table of contents. Use the commands \subsection{} and \subsubsection{} to create sections within sections.

To create PDFs with LaTeX the user must generate a .tex file.  The .tex file will consist of the code that is compiled by the back end LaTeX software to generate the end result PDF document.  With LaTeX installed .tex files can be created in notepad or textedit on Windows or OS X computers respectively, though it is strongly recommenced to generate these files directly in a LaTeX text editor as discussed in the Getting Started: Installation tab.

A LaTeX document consists of two main pieces, the preamble and the body, the bibliography can be considered a third piece depending on how you structure it, but that will be discussed in the BibTex tab of this guide.  It is recommended that the user creates a new folder on their computer for each LaTeX document they are working on.  When LaTeX compiles a .tex file it generates several files in order to create the PDF so having a folder for each individual document you are working on will help keep all of the files generated organized.  Additionally, it is possible the user will want to insert images, figures, or other objects into their document (BibTex files for example), and it is much simpler to insert items into the document when they are located in the same folder as the .tex file.

Different objects are placed in the preamble between the commands \documentclass{} and \begin{document}.  The most common of these items is the command \usepackage{}.  A more detailed explanation of what packages are can be found under the LaTeX Structures heading on this page, but briefly a package informs the compiler of certain commands that will be used and certain procedures to take while generating the final document.  Any number of packages can be included in the preamble, and one of the most common mistakes made by the new LaTeX user is to include a command in their document without including the proper package in the preamble.  Other commands such as \title, \author, and \date are included in the preamble and than may be incorporated within the document.  Lastly, new commands can be created in the preamble that will only be used in the current document.

One of the most popular features of LaTeX is its ability to easily incorporate and format mathematical equations and symbols.  There are two important things to remember to ensure LaTeX handles mathematical formulas properly.

First is to make sure that you have included all necessary packages.  The most common package for using mathematical formulas in a document is "amsmath."  Although this package allows the use of a multitude of mathematical symbols and commands, it does not include everything.  If you try to compile a document and an error occurs related to a mathematical object you have included you will want to check if there is an additional package you need.  For example, if you try to include bold lettering in a mathematical equation without the package "bm" an error will occur. 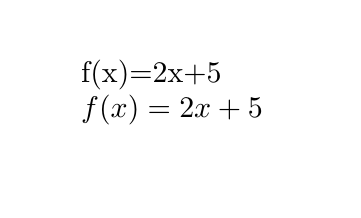 There are several different ways to enter math mode.  If you would like to write a mathematical expression inside a line of text, all the mathematical text should be bookended by $.  For example writing $x+3$ would tell LaTeX to write x+3 as math. If you want math to appear on its own line in what is called display mode, you can use either the command $$ on both sides of the math, or \[ and \].  The previous example would look like this: $$x+3$$ or \[x+3\].  Finally, some commands will automatically place the user in math mode.  For example, any text appearing between the commands \begin{equation} and \end{equation} will be written in math mode.  Go to the Exercises tab for some questions to let you practice using math mode.

Commands are a vital structure for creating any kind of document in LaTeX.  Commands have many uses such as changing document/text formatting, creating equations, delineating sections of a document, and inputting symbols.  To use a command a back slash is placed before the command.  For example \pi is the command to insert the symbol π and \begin{matrix} is one of the commands needed to input a matrix.  Generally commands have the format \command[optional argument]{required argument}. Multiple arguments can be used with some commands by separating each argument with a comma, for example \hypersetup{colorlinks=true, linkcolor=blue, urlcolor=blue} sets the font color of certain hyperlinks in a document.  Some commands such as \pi have neither a optional nor required argument.  Others such as \begin{} will only work with a recognized required argument.  Some commands can also accept an optional argument which is used to specify what action the command will take, for example \documentclass[11pt, twocolumn]{article} tells LaTeX that the current project is an article with 11pt font and should be formatted with two columns.  Leaving out the optional argument, \documentclass{article}, will cause LaTeX to use the defaults associated with this command. Explore different document classes at this CTAN website.

Lastly, some commands may have more than one required argument. For example \frac{numerator}{denominator} creates a fraction where the first argument is the numerator and the second argument is the denominator.  A list of common commands can be seen in the Common Commands section of this page, there are also links to several useful websites with lists of commands in the Resources tab.

Packages are used to supplement the standard features of LaTeX.  If you are trying to use a command and find that it is generating an error, one of the most common issues is that you have not included the needed package in your document.  The command \usepackage{} with the package name as the argument will tell LaTeX to include a certain package in your document. Packages should be placed in the document preamble (see Document Structure below).  If you would like to include multiple packages in your document, you can either include the \usepackage{} command multiple times or use it once and separate each package name with a comma i.e.:

It is better to list the packages separately if you intend to use an optional argument with any package, otherwise it just comes down to personal preference.  Many standard packages come with a MikTex or MacTex download, but you can also install new ones if needed.  Some instruction for installing new packages can be found here.  See the Common Packages part of this page for a list of some useful packages.

Writing text in a LaTeX document is easy.  Once you are inside the body of the document, as described in the Document Structure section of this page, all you have to do is start typing.  When you compile the code, LaTeX will take care of all the text formatting based on any commands and packages used.

Search for existing packages that are already formatted to your needs by looking for style files. Most journals that accept LaTeX formatting will have style files available for download. Some places that you can search for these files are:

Incorporating mathematical symbols and equations is one of the most popular features of LaTeX.  There are a number of ways to include math in a LaTeX document.  For more information see the Document Structure section of this page.

Anything that follows a % in a line of code will be treated as a comment and ignored by compiler.  If you want to include a percentage symbol in your text use the command \%. For example, if you want to write 100% in LaTeX you would write 100\%