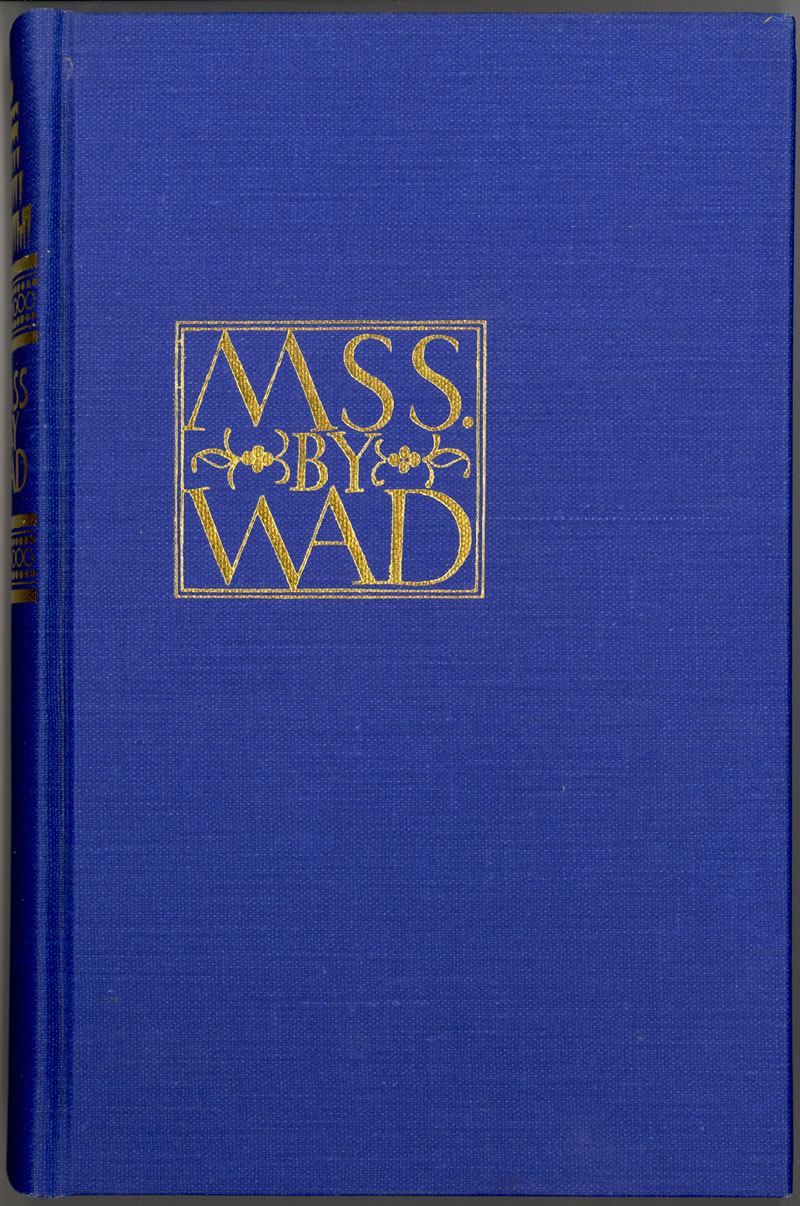 Mss. by WAD : being a collection of the writings of Dwiggins on various subjects, some critical, some philosophical, some whimsical

Merrymount Press (1893-1941), from Boston, created by D. B. Updike, is regarded by some as the finest representative of the Arts & Crafts movement in American book arts; its motto was "to do common work uncommonly well."

Roycroft Shop (1894-1938), Elbert Hubbard founded this Arts & Crafts community in East Aurora, NY in 1895, after falling under the William Morris spell. With business acumen, Hubbard advertised Roycroft products in various magazines (including his own), and himself as an American John Ruskin or Morris. His charisma and the community attracted a great number of visitors, many who stayed and joined the community.

Frederic W. Goudy (1865-1947), founded the Village Press in association with his wife, Bertha, and with Will Ransom. Goudy designed over 90 fonts, the most famous being Copperplate Gothic, Kennerley, and Goudy Old Style. In 1941 he designed Scripps College Old Style, specially for that college. Bertha Goudy was a self-taught book designer and compositor, one of America’s pre-eminent woman graphic designers.

Bruce Rogers (active 1895-1957) - regarded as the greatest American book designer of the twentieth century, known for his "classical" style. Inspired by the Kelmscott Press Rogers moved to Boston, then a center of publishing, to learn printing. In 1915 he designed the Centaur type face, still much used today, specifically for a limited edition of Maurice de Guérin's The Centaur. The font was based on the Venetian typefaces of Nicolas Jenson, which were also the inspiration for the Kelmscott and Doves Press types.

W.A. Dwiggins (1880-1956) attained prominence as an illustrator and commercial artist. Working with publisher Alfred A. Knopf, Dwiggins was perhaps more responsible than any other designer for the improvement in general book design in the 1920s and 1930s. His focus was the commercial market, unlike the more rarefied work done by Rogers and Updike. Dwiggins is credited with coining the term “graphic designer” in 1922 to describe his various activities: book design, illustration, typography, lettering and calligraphy. The fonts he created include Electra, Caledonia and Metro.