Adonais: An Elegy on the Death of John Keats printed by John Henry Nash for William Andrews Clark, Jr.

Walt Whitman's Leaves of Grass printed by the Grabhorn Press 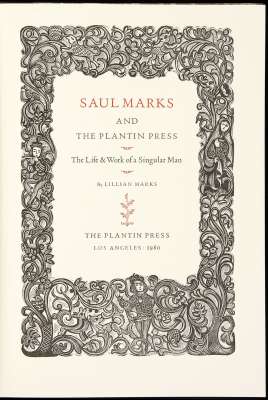 With an influx of people and entrepreneurial spirit after the Gold Rush, and writers such as Mark Twain, Robert Louis Stevenson, Gellett Burgess, and Bret Harte around, quickly became a hub for independent and creative book artists. Some of them were:

Edwin and Robert Grabhorn – the brothers arrived in San Francisco from Indiana in 1919 and quickly attracted a loyal clientele with their Grabhorn Press (1920-1965). They established the bibliophilic field of Californiana, printing works about the history and literature of their adopted state. Grabhorn books were regarded as a western version of Bruce Rogers' allusive typography, wedding type and typography to subject, but taking it farther with a greater variety of styles. One of their regular contributors was the remarkable illustrator Valenti Angelo.

Jane Grabhorn – Started her Jumbo Press in 1937. Wife of Robert Grabhorn, she delighted in breaking the typographical seriousness and rules she saw around her. Later with the Colt Press she printed more conventional but nevertheless distinctive books.

At the beginning of the 20th century, Los Angeles did not have a strong publishing market like San Francisco, much less one for fine printing. Bruce McCallister was one of the first to create well made books in Los Angeles, in the 1920s. The scene picked up at the turn of that decade, thanks in great part to Ward Ritchie, and the Plantin Press:

Ward Ritchie (1905-1996) – Grew up in South Pasadena. His best friend since childhood was Lawrence Clark Powell, also Oxy class of 1928 and future UCLA Librarian and first Dean of its library school, and for whom UCLA’s Powell Library is named. Inspired by an exhibit at the Huntington Library of books from the Kelmscott and Doves Presses, Ritchie dropped out of law school to pursue printing and publishing. After a year apprenticing in Paris with Francois-Louis Schmied, Ritchie returned to Los Angeles carrying his first book, Apology for Bad Dreams, a volume of Robinson Jeffers poems.

The output from the Ward Ritchie Press was mostly commercial work, much of it commissioned by the Huntington Library, Book Club of California, and other local institutions. In his later years, when “retired” and living at Laguna Beach, Ritchie established the Laguna Verde Imprenta, and returned to handcrafted, more personal books done on an Albion press. Ritchie kept the Laguna Verde editions to “about 50 copies,” because as he put it, “printing more than that becomes boring rather than fun.” His late romance with actress and artist Gloria Stuart (Titanic) sparked a delightful printing collaboration.

Plantin Press (1931-1985). Saul Marks learned the printing trade in Poland during the First World War. He emigrated to the US, and in Detroit met and married Lillian, a fellow Pole. Hoping to work with the greats, Grabhorn Press or John Henry Nash in San Francisco, Saul headed out west, ran out of money in Los Angeles, loved the weather, and called for Lillian to join him. In 1931 they established the Plantin Press, named after Christophe Plantin, whose press founded in Antwerp in 1555 lasted three centuries.

Thus Los Angeles gained its own equivalent of Nash or the Grabhorns, a printing master of extremely high standards, technical skill and impeccable taste.